← more from
School of the Arts
Get fresh music recommendations delivered to your inbox every Friday.
We've updated our Terms of Use. You can review the changes here. 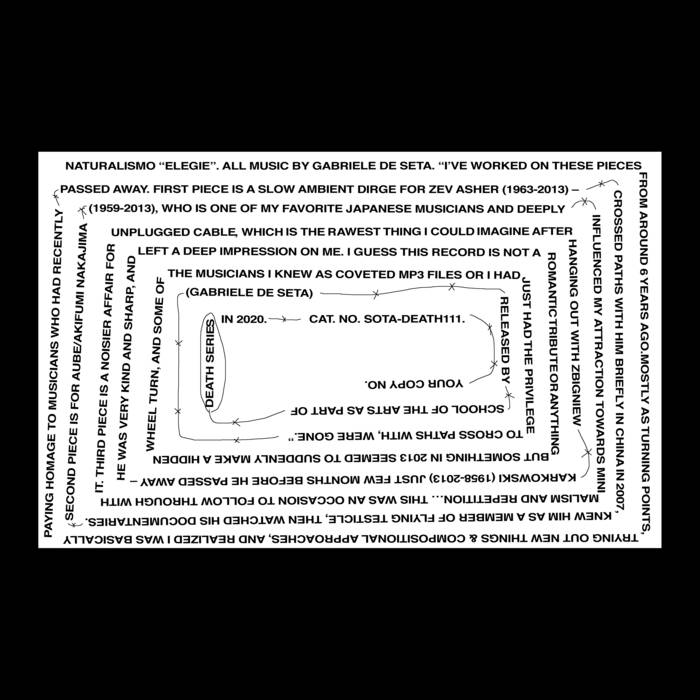 This cassette is the first installment in the label's Death Series, and it is, indeed, a eulogy. Italian artist and media anthropologist currently residing in Bergen, Norway Gabriele de Seta (Naturalismo) has recorded three beautiful compositions for Zev Asher, Aube, and Zbigniew Karkowski respectively.

“I’ve worked on these pieces from around 6 years ago. Mostly as turning points, trying out new things & compositional approaches, and realized I was basically paying homage to musicians who had recently passed away. First piece is a slow ambient dirge for Zev Asher (1963-2013) – crossed paths with him briefly in China in 2007, knew him as a member of Flying Testicle, then watched his documentaries. Second piece is for Aube/Akifumi Nakajima (1959-2013), who is one of my favorite Japanese musicians and deeply influenced my attraction towards minimalism and repetition… This was an occasion to follow through with it. Third piece is a noisier affair for unplugged cable, which is the rawest thing I could imagine after hanging out with Zbigniew Karkowski (1958-2013) just few months before he passed away – he was very kind and sharp, and left a deep impression on me. I guess this record is not a romantic tribute or anything, but something in 2013 seemed to suddenly make a hidden wheel turn, and some of the musicians I knew as coveted mp3 files or I had just had the privilege to cross paths with, were gone.” (Gabriele de Seta)

Bandcamp Daily  your guide to the world of Bandcamp

Mille Petrozza stops by to talk about the new Kreator album, plus music by Trauma Bond